Please Note: You are viewing a legacy website that is no longer being supported. [more info] 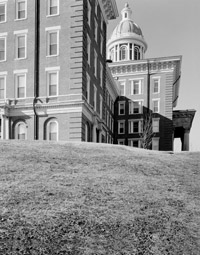 Exterior side view of the St. Louis County Insane Asylum.

Founded in 1869 in the middle of a vast expanse of land, the St. Louis County Insane Asylum, now known as the St. Louis Psychiatric Rehabilitation Center, was designed to hold 250 patients. In recent years it has become a place of rehabilitation for people living with mental illness, transformed from an institution devoted to keeping people separate from society.

During the 1800s institutions opened that catered to people with disabilities. Most of these facilities focused on restraining and controlling patients, not on treatment or therapy. They housed people with cognitive, developmental, physical, and emotional disabilities, often for the entirety of the person's life.

The St. Louis County Insane Asylum, later the City Sanitarium, was established in 1869 to house the "indigent insane." By 1907 over 2,000 patients lived in its wards and worked on its grounds. In 1875 reports of sedative overdosing hit the papers. An 1886 scandal was reported in the New York Times about cases of "cruel and inhuman treatment of inmates." This was just one of many institutions in which people with disabilities were mistreated and locked away.

Institutionalization became even more popular in 1883 when Sir Francis Galton's pseudo-science of eugenics took root in America. With the aim of "improving the stock of humanity," eugenics sought to separate members of society who were termed undesirable. Laws were passed that led to the forced institutionalization and sometimes sterilization of many people with disabilities well into the 1970s. This trend would eventually be overturned, as the focus turned to helping people with disabilities live within their communities. 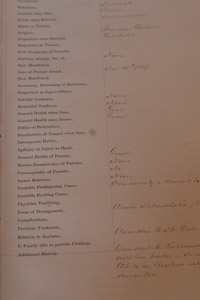 A page from the intake book from the St. Louis County Insane Asylum detailing why people were admitted and their mental condition.

This page from the admittance book at the St. Louis County Insane Asylum (1868) is typical of the time period. Patient histories included a vast array of information about the patient's condition and the conditions of family members. Causes of admittance ranged from "feeble-mindedness" to "acute melancholia."

Some institutions that were founded with the purpose of institutionalization transformed to places of therapy and education. Emmaus Home in Marthasville, Missouri, was founded in 1883 as a home for epileptic patients. It provided residential services for people with intellectual disabilities, in addition to teaching life skills. Over time their services evolved, and they now work with individuals to help them live and work in the community. (See the image gallery on Emmaus Homes in Marthasville and St. Charles)

Eventually, the focus shifted to education, and schools began to work with students to help them adapt. Schools like the American School for the Deaf and the Perkins School for the Blind worked with people with specific disabilities to develop methods, such as sign language and Braille, that allowed them to participate in society. President Abraham Lincoln conferred on the Columbia Institution for the Deaf and Dumb and Blind (later re-named Gallaudet University) the ability to grant college degrees, establishing the right to education for people with disabilities. These schools taught students how to break down the barriers they faced in society. 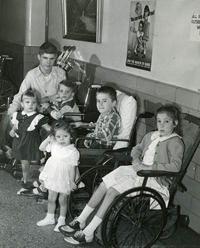 Children of various ages sit in a hallway, several of them in wheelchairs.

Children admitted with polio sit in the hallway at St. Anthony's Hospital in St. Louis. Polio epidemics cause major panics in the United States, and thousands of men, women, and children were struck by the polio virus. Many survivors lived with disabilities as a result of the disease.

Alumni of specialized schools like the Missouri School for the Blind became the nucleus of an early disability rights movement. At the school, students were taught specific skills so that they could live and work in their communities. But still society refused to accept them as functioning members, and many students returned to the schools for employment. They formed organizations at the local and state levels to represent the professional interests of former students. The American Foundation for the Blind, founded in 1921, was made possible by these early organizations.

The American Foundation for the Blind identified four main areas of concern: research, resources, services, and representation. These areas became the focus of future organizations and allowed agencies to advocate for technological and legislative progress. When the National Federation for the Blind was founded in 1940, it took as its cause the right of blind men and women to manage their own affairs and pursue their own interests. The successful efforts of organizations such as the National Federation for the Blind, as a part of the larger Blind Movement, became a model for the Disability Rights Movement. 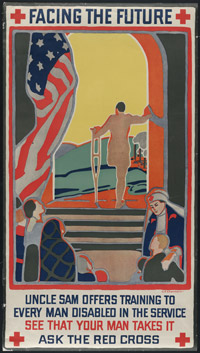 Poster from the Red Cross with an American Flag and a soldier who has had one leg amputated. The words read "Facing the Future: Uncle Sam offers training to every man disabled in the service. See that your man takes it. Ask the Red Cross."

The Red Cross helped American veterans who returned from war with debilitating injuries and disabilities find training and new jobs so that they could support themselves and participate fully in society.

Courtesy of the Library of Congress

American veterans became the driving force behind change following the two world wars, leading the fight for equal treatment and access to society for people with disabilities. Returning soldiers demanded care and support for the injuries they sustained in the line of duty. As a result of advances in medical care, especially the discovery of penicillin, more people were surviving formerly fatal injuries and diseases, and thus the number of veterans with disabilities grew exponentially. These men expected to return home and participate in society, not be locked away. Organizations like the Veteran's Administration successfully lobbied for therapy, adaptive technology, training for new jobs, housing, and disability assistance programs. These first federal rehabilitation programs laid the foundation for future programs for civilians.

In their own words